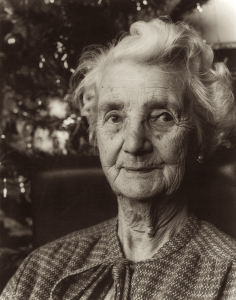 Christina was approaching 103 when I made her portrait just before Christmas 1983 (note the lighted tree in the background). What an alert and wonderful woman. She said she enjoyed nothing more, even at 102, than having another person to look after. And from what I was told at the time, she did just that every day, caring for another elderly woman who had become her friend. Christina felt certain that being independent and resourceful helped her to reach her great age, along with having a strong interest in people.

Her advice to today’s young people, she said — making it clear that she was including me — was to avoid alcohol and tobacco, solve their own problems and have as much fun as possible. Christina also said that a deep belief in God is the best defence against all life’s problems. She smiled easily and often and seemed to possess a sense or a knowing that lay beyond words, something I observed also in other centenarians.