Gus was a renowned local historian with a memory hard to match. H 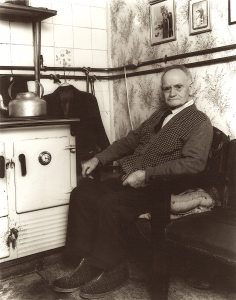 e recalled in detail events ninety years in the past and was very well versed in news and current events. He earned his living as a farmer but didn’t stop there. He also taught traditional Irish dancing, acted on stage, and as a matchmaker had brought about many long and happy marriages. On top of that he had found time to be elected as a local council representative.

Up to the age of ninety-eight he read the newspaper every day, cover to cover, he told me. In a strange twist of fate, Gus remembered my wife’s grandmother who emigrated as a child from Ireland to America in the early 1900’s, nearly eighty years before. A truly inspiring man, Gus expressed a wish to be photographed in his favourite cushioned chair beside the stove, with his wedding picture above his head, his best jacket warming on the pipe, and his ‘mucky outdoor shoes’ tucked well out of sight (partly visible under his chair). Gus believed the reason he lived so long was his willingness to work hard and his ability to enjoy life every day. A very interesting man with lots of stories to tell.