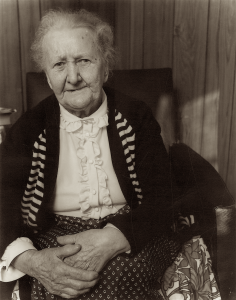 Annie was a truly wonderful lady, practical, independent and entertaining. When I arrived at her small home just outside Dublin City she was about to walk to her local butcher shop for, as she put it, ‘a few lamb chops and a bit of mince’. However, she gladly changed her plans and for the next three hours she regaled my brother Desi and me with riveting stories, vivid details of actual historical events, and then went on to sing a number of old Irish ballads for us — an amazing experience

Annie’s biggest disappointment, she told me, happened on the day before her birthday one year earlier, in 1983, when the parish priest came to inform her of a mistake in the birth register. He told her that on the following day (her birthday) she would not be turning 100, as she believed, but ninety-nine. She was dismayed, she said, but decided there and then that she was going to celebrate anyway, and so she did. One year later, in 1984, on her 100th birthday, she had an even bigger party; that was just weeks before I met her.

Annie’s recall was crystal clear. She remembered Michael Collins (Irish revolutionary leader killed in 1922). And she told me of witnessing the brutality of the Black-and-Tans, a notorious military force of ex-British Army ‘constables’, as they traumatised her neighbourhood in the early 1920’s, and much worse besides.

Later, I drove Annie to do her shopping and then back home. Her secret for living to 100: Worry only when you must, which is seldom, keep moving and thinking every day, and most of all enjoy life — and sing as often as you can. Truly unforgettable.