Demanding as it was, the shooting of the centenarian images on 4×5-inch negatives was a thoroughly enjoyable adventure. Printing the gallery images, however, was frustrating and tedious. Back in the 1980’s photographic printing was a chemical process that happened in a darkroom. Standard black-and-white printing was simple enough, involving just three baths of chemicals. But prints made in this way often faded or developed chemistry stains over time. For this reason, museums and fine-art galleries demanded ‘archival processing’, images that were expected to remain perfect for 150 years or longer. Such prints needed to go through a minimum of six to eight baths of chemicals. And if the images were to be ‘bleached and toned’ (as the centenarian images were) three extra baths were required. So it was necessary to put each large-size centenarian portrait through ten or more baths, and hope that the sepia tone, density and contrast would be right at the end of the process.

To get high-quality, archivally processed images of the seventeen centenarians, I discarded more than a 150 prints that were either tests or not precisely what I wanted. This might seem excessive, and it was, due mainly to the standard I set but also because I had to learn the archival process as I went along; I had not printed by this method before.

I knew the print making part of the project would be particularly challenging, but I was determined to make these images myself. Many leading fine-art photographers and photojournalists of the day sent their negatives to be printed at Pictorial in Paris, probably the best black-and-white photography lab in the world. I had that choice, but I could not imagine even a master photographic printer understanding all that I needed (and had invested) in each image. So, that meant numerous nights alone in a rented darkroom, alone because I wanted the portraits to be seen by no one before the exhibition opened on October 1st 1984.

My interest in art dates from when I was about eleven. Later, when photography became my focus, the only picture over my bed was of an early Pentax SLR, beautiful but totally unaffordable at the time, a dream. Through the following decade I learned a lot, and in my early twenties I started getting paid for my photography work.

In one of my earliest assignments I was daring enough to photograph the London Motor Show for an international magazine — with a clunky East German Practica SLR and a single 50mm lens. I hated the camera but loved the buzz, and the images were published, which set my direction, at least for the short term. Subsequently, part-time photography paid my way through university. However, my major field of study changed very definitely from arts to psychology (but my love of photography and the photographic image never waned). I knew I could make money with a camera, which was critical to my goals at the time. Despite this fact, I was equally in love with photography as a fine art medium. The images of Henri Cartier-Bresson, Tony Ray-Jones, Edward Steichen and Diane Arbus intrigued me no end, as did the work of other great image makers.

While studying at Arizona State University and Phoenix College, I met and learned from icons of the medium, among them David Hurn, Patrick Ward, Eddie Adams, Don McCullin and Allen Dutton. Another of the great photojournalists of that era, Eugene Smith, was then teaching at the University of Arizona, just two hours drive from me, but sadly he died shortly before I was meant to meet him.

After university I deferred going to work in psychology, which was still my goal, and instead transferred some of the skills I had learned into documentary and corporate film making. Over the next few years this brought a lot of travel, excitement and some major awards. Until one day it was all over. I could no longer put off the draw of psychology, teaching and business consulting, so I left the art world in favor of organizational psychology. A big career shift that I never regretted. And photography as an art still moves me as much as ever.

Would I take on the centenarian portraits project again? Of course — if I were back in that time. Alas, it will never be again. Time and technology move on, just like people. Fortunately, photography preserves what we cannot afford to lose.

Below: The personally written letter I received from centenarian Cecilia Lecky Watson in 1984 inviting me to visit her and capture her portrait. 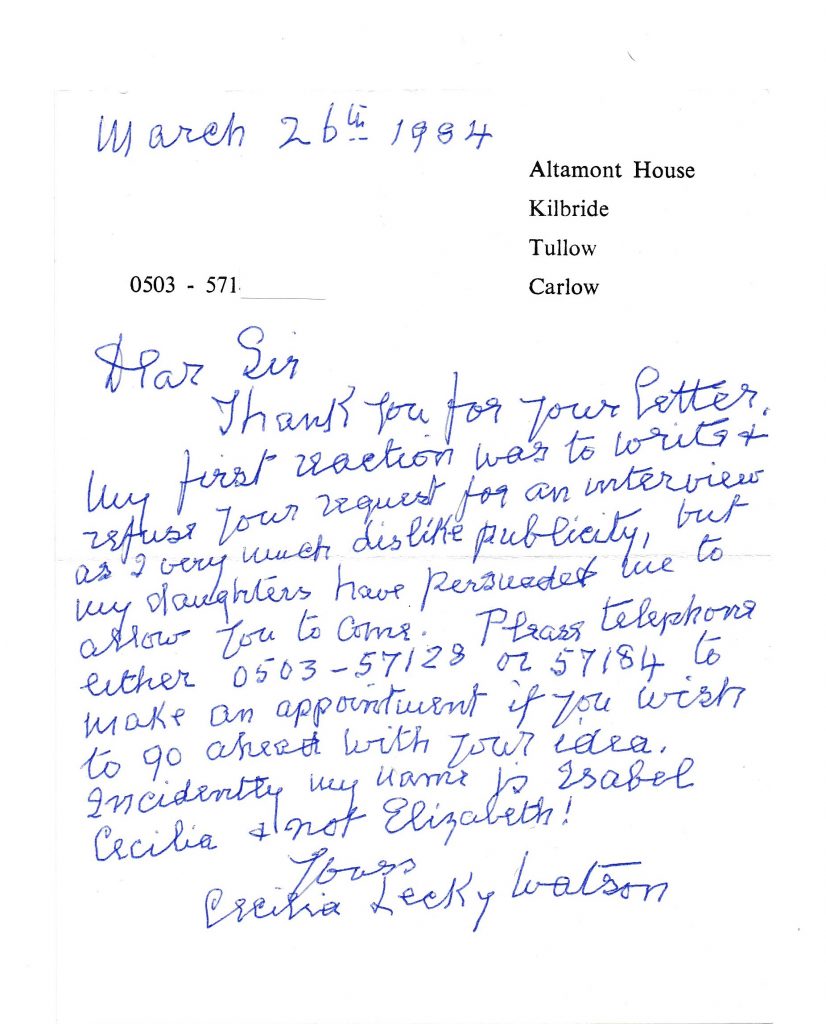