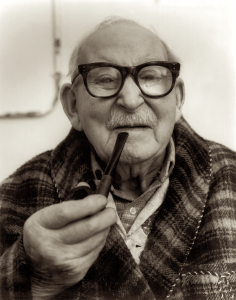 John was very clear on his recommendations for living a long life: ‘Live hard and play hard and never let life get you down for very long’. He believed that people can direct their own lives to a much greater extent than most realise or ever actually do. John did manual work since he was a young teenager and stopped in his nineties, he said, only because of stiffness in his hands.

He told me he reads a daily supply of magazines and newspapers and fills his pipe three times most days. He never liked people fussing over him, he said, preferring to take care of himself. For that reason, he refuses to be wheeled about, insisting instead on walking everywhere under his own steam. He loved the idea of having his portrait made and thought it ‘wouldn’t feel right ‘ to do it without his beloved pipe in hand, to which I readily agreed.